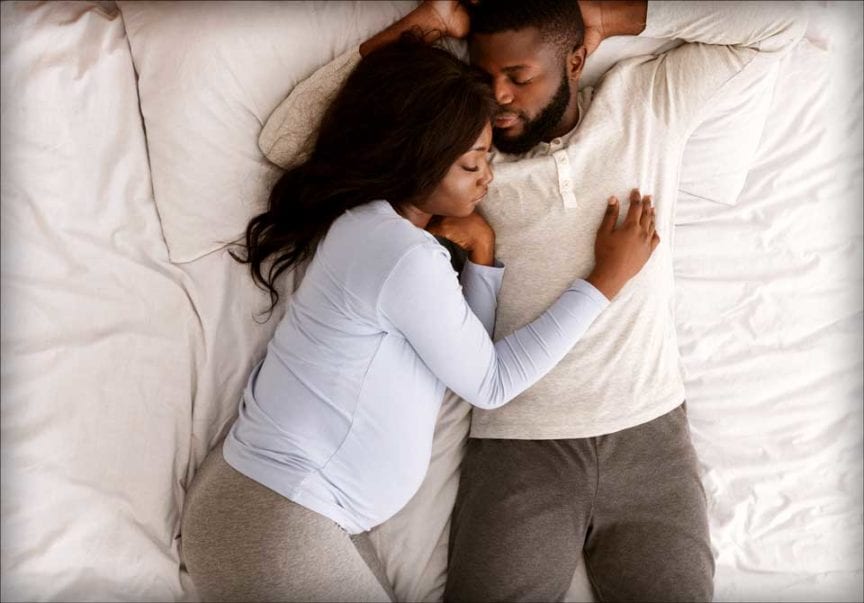 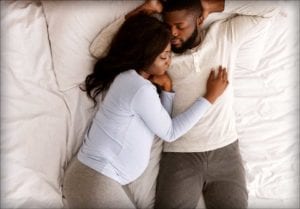 Sex and babies. You almost always have one to make the other. But that’s where the conversation seems to end. There isn’t a lot of discussion about sex during the process of conception, pregnancy and after baby. We wanted to have an open and honest conversation on the topic, so we spoke to an expert. Thirty-three-year-old Jenna Nakamura is a sexual health educator and wife to Steve, mom to Hartley (18 months) and stepmom to Damian (15 years old) and Kenyon (nineyears old).

Content note: this is the unedited version of Felicia Zuniga’s conversation about sex before and after conception, pregnancy and birth with sexual health educator Jenna Nakamura. It contains graphic descriptions of sexual activity and may not be suitable for all readers.

Want to read the edited version or more content about modern parents getting busy, check out our Spring 2020 issue: Let’s Talk About…

What was your sex life like before trying to conceive?
Active and exciting. We were experimenting with different types of sex weekly.

What was sex like during conception?
I had been tracking my period for the previous few months, so I was aware of when I was ovulating, but I didn’t tell my husband as I didn’t want to add any stress. So, I planned to have sex two to four days before ovulation in order to try and have a girl (called the Shettles Method), which was also right around my birthday. We had sex two days before my birthday and on my birthday and we got pregnant. The sex was just like it always was – foreplay that included digital sex (fingers) and oral sex before penetration. Lube and a vibrator are tools that we have always used and continued to use when we were trying to get pregnant. We played around with different positions including from behind, me on top and ended in me laying on the bed with my legs up and him standing at the end of the bed with simultaneous orgasms.

What was sex like during your pregnancy?
We continued to have sex weekly for the first few months. I had a relatively easy pregnancy and only a handful of really sick days. It took a while for my bump to show and all those extra hormones made my orgasms even more intense, so I really enjoyed sex in the first trimester. During the second trimester, the sick days were gone, but my bump looked more like a bloated stomach and the changes that were happening to my body didn’t make me feel very sexy and I was less in the mood, probably because I was uncomfortable with my body. We started to have sex maybe every two to three weeks. I preferred sex with the lights off and from behind because I didn’t like the way my stomach looked since it wasn’t quite a pregnant belly yet. I was self-conscious, even though Steve kept telling me how attractive he found me and my body every step of the way. I started to have a real bump around six months and then I finally embraced my new curves. However, positions that felt good before didn’t work anymore. It resulted in a lot of sex from behind or me on top instead of me on my back and him standing at the end of the bed. Doctors don’t recommend being on your back in your third trimester because of the weight of your belly and the chance the uterus pressing on the vena cava. We never really did the spoon position as it didn’t do too much for us in the pleasure zone. We continued to use lube and a vibrator throughout the entire pregnancy. Sex in the third trimester was once every two and a half to three weeks up until the last few weeks, where we increased it to every few days to try and induce labour.

After you gave birth, when did you start having sex again and what was that like?
I think we waited the recommended six weeks. I had a vaginal birth and some tearing, so I really wanted to give my vagina time to heal. When we did have sex again, it felt like it was the very first time. His penis felt bigger than before and even though it was enjoyable while we had sex and I was able to orgasm just as easily as before, it was painful afterwards for a few days so we decided to wait another week or so before trying again. I remember lactating during sex and it’s just something we laughed at as this was our new normal, but there was definitely some milk leaking from my nipples during sex while I was laying on my back and he was on top. Lube has always been our cherry on top to make our great sex even more pleasurable, but after labour, lube was a must. I was not getting wet like I used to, and we needed a lot more lube than before for sex to be comfortable, let alone pleasurable.

Did you co-sleep? If so, how was your sex life affected?
We co-slept for three months, but we didn’t actually notice a difference in our sex life because Steve always works late into the night. We rarely went to bed at the same time before baby, so sex at night was not common for us. We are more mid-day sex people. Co-sleeping prevented us from snuggling at night though, because we were [in] a queen bed with two adults and a newborn. We couldn’t have been any farther apart in that bed for fear that we were going to squish our newborn.

How did you explain a new baby to your older step-kids?
My step-kids had a brother born a few years before my daughter from their mom and her husband, so they had already had the “how babies are made” discussion from either school (the older one) or talking to their mother about it. However, there is a fantastic book called What Makes a Baby by Cory Silverberg that explains how babies are made without the details of sex, which is great for younger kids who are curious, and for parents who don’t yet want to explain vaginal sex. I highly recommend it to parents of toddlers/young kids.

Do you feel like sex has changed for you and your partner since having your baby?
Definitely. I almost question how it wouldn’t change for new parents. You now have something else taking your energy and focus during the day and your sex life can easily take a backseat, especially in the first few months while you get your bearings with this new life you are now responsible for. Sex for the first six months in general was a lot harder to get into. I felt like I had lost my sex drive and I felt guilty for it. I kept track in my mind of every week we were not having sex, but I was so tired and exhausted that I would either be napping when the baby napped or used that time to get stuff done around the house because I wasn’t able to be productive when baby was up. I would have to really work myself up to initiate sex. If I wasn’t in the mood, but Steve was, foreplay (like digital or oral) was always a great way to help get me there before penetration. After sex, I was always glad we had it, it was just getting into the mood before sex started that was a challenge. Now we have sex once every two weeks, sometimes more or less frequently. Sex is now definitely more about quality over quantity, which I am more than happy with.

Want to read more about how modern parents get busy? This is the uncut version of the #realmomtalk article appearing in the Spring 2020 issue of Birthing: Let’s Talk About. Available now.