The team at Birthing Magazine is dedicated to providing women with knowledge to make empowered and informed decisions about their bodies. While we know that many women birth free of interventions there are times when an intervention is suggested by a care provider. In the coming issues we will look at common interventions used in pregnancy and birth. 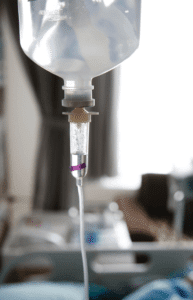 What are IV Fluids?

An IV fluid is a liquid solution that enters the body directly through a vein. It is sometimes called a “drip” or IV therapy. During labour the solution commonly used consists of saline, electrolytes and sometimes sugar. It will usually be inserted into the arm or hand. IV fluids can be administered by nurses or midwives in home, birth centre or hospital settings.

Why are IV fluids used during birth?

IV fluids may be used during birth for the following reasons:

Things to think about:

As with any medical intervention, your care provider should explain why the procedure is recommended and why you may or may not want it. Consider these potential issues when offered IV fluids.

Drinking and eating during labour can help to maintain energy levels and prevent dehydration. Remind your birth support team to offer you a drink between contractions. Some midwives suggest sipping on drinks that can help replace electrolytes. See the recipe for Labour-Aid.

IV tubing and poles can interfere with movement and mobility.You can ask your labour support team to help you move with the IV pole and pump. In some cases your healthcare provider can detach the tubing and cap the IV port until the IV needs to be re-started.

Any break in the skin can become a potential source of infection. Let your healthcare provider know if you notice any signs of infection at the IV site, such as redness, heat or pain.

While many women experience post-partum fluid retention, receiving IV fluids and the drug (Syntocinon) used to induce labour can significantly increase edema. Keeping your feet elevated and staying hydrated can help your body get rid of excess fluid in the post-partum period.

Excess fluid retention in the mother can affect the whole body, including the nipples and areolas. Dr. Jack Newman 1 has identified this issue as a source of difficulty for a newborn’s latch. Breast edema caused by IV fluids is sometimes mistaken for engorgement but treatment for engorgement often makes it worse. If you are coping with breast edema due to IV fluids, a technique called reverse pressure softening (RPS) can facilitate breastfeeding. Speak with your midwife or lactation consultant for breastfeeding support.

Research published in the International Journal of Breastfeeding2 shows that IV fluids given to mothers during labour can result in babies being overhydrated. Writer Henci Goer notes that, “This extra fluid inflates the baby’s birth weight and the subsequent weight loss after birth. Doctors and others often gauge breastfeeding adequacy by how fast the baby regains her birth weight, so this misleading weight loss may lead a doctor or mother to mistakenly conclude that breastfeeding is inadequate.”3 If your baby’s weight loss is a concern, make sure to talk to your midwife or lactation consultant about the many indicators of successful breastfeeding. (More on Reverse Pressure Softening)

Receiving intravenous fluids can be a necessary intervention during labour and birth, but in some cases there are alternatives that have fewer effects. If you do require IV Fluids during your birth and you know ahead of time what to expect, you can be confident that there are ways to mitigate the potential impacts. If in doubt, seek out another opinion. Remember to trust your instincts, trust your body and trust your baby.

Nicole Allarie is a mother to two children, both caught by midwives. She is an advocate for the midwifery model of care and women’s informed choice in childbirth.