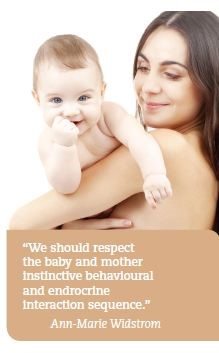 Louise Dumas presented information providing substantial weight to the view that the simple act of placing an infant on his mother’s skin immediately after birth has a profound, far-reaching impact. Dumas’ presentation, backed by a longitudinal controlled study of 176 mother-baby dyads conducted by a Russian-Swedish-Canadian team at the Karolinska Instituetet, highlighted the breastfeeding, physical, and psychosocial effects of skin-to-skin care.

The depth of evidence accumulated from this research will pave the way for change in birth and postpartum care to incorporate uninterrupted skin-to-skin time for mothers and babies. In Dumas’ words, backed by this evidence, skin-to-skin is “not something nice to do. It’s something we have to do.”

Skin-to-skin care, as practiced in this research, is described as the nude newborn being placed vertically between the mother’s breasts immediately after birth. Only after the baby is on the mother is the amniotic fluid dried off the infant’s back and head. Then a dry blanket is placed over top of them. Keeping the amniotic fluid on the newborn’s front is important, as is the absence of any separation at all of the mother and the infant for one to two hours following birth.

The data taken from the infants in this research included, temperature, breathing and heart rates, cortisol and oxytocin levels in venous blood in the umbilical cord, scalp blood, weight, number and duration of breastfeeding episodes, number and type of supplements, and Reutor scale for neurobehavioral development. The data from the mothers included physical assessment, temperature, breathing and heart rate, multiple questionnaires, and a breastfeeding diary. Also recorded were the temperatures of the birthing room, the nursery and the mother’s room as well as videos taken when the infant was placed skin-to-skin, during a breastfeed on day four, and again at twelve months.

Based on this and other research, the physiological impacts of skin-to-skin care on the infant are numerous. Infants placed skin-to-skin with their mother and left uninterrupted for one to two hours always have temperatures within normal limits and if they are removed from their mother, they re-warm faster when returned skin-to-skin than infants in an incubator or in a warmer. They have better blood sugar levels and arterial gasses at 90 minutes of life and better oxygen saturation levels. In other words, skin-to-skin helps newborns overcome the “stress of being born”1.

During their first four hours of life these infants have more episodes of calm sleep and they are more coordinated and stable. They also have reduced pain reactions during painful procedures such as the vitamin K injection and the PKU heel lance.

The impact of skin-to-skin can also be seen in the breastfeeding relationship. Starting at around ten minutes of life, infants start creeping towards the breast, turning towards mom’s voice and breast, salivating when smelling the nipple, finally licking and then attaching to the breast. In babies who have been exposed to medications during mother’s labour, these behaviours might start to take place closer to twenty minutes after birth, but they still occur if the baby is skin-to-skin with his mother.

This skin-to-skin time results in an infant with a more effective suck. On days three and four, in the skin-to-skin group the babies have more sucking episodes and more milk intake. The mothers also have less engorgement. Skin-to-skin babies re-gain their initial weight loss three to five days faster than swaddled babies in the nursery, even if the babies in the nursery receive more supplements with formula. There is also a significant link between the duration of skin-to-skin and the exclusivity of breastfeeding at discharge.

The psychosocial benefits from skin-to-skin are also numerous. Infants cry less not only at birth, but also during the first 90 minutes of life, and during their first three months. They are more alert after their first cry, they have more vocalizations, and they focus more on mother’s face and breast. At one year of life, infants who had experienced uninterrupted skin-to-skin time at birth are more able to calm themselves and there is more mutual reciprocity between mother and infant.

Mothers who experience uninterrupted skin-to-skin touch their infants more and keep their babies with them more. They also tend to follow whoever takes their baby away for medical exams or bathing. During the day four videotaped breastfeeding sessions, mothers who had experienced uninterrupted skin-to-skin are observed to be more patient with their infants. They also respond more softly to the infants’ cues, whereas the mothers of the swaddled babies demonstrate a clear tendency to be rougher and more frustrated with their infants.

Dumas spoke about situations where women bringing this information to their doctors created change. Although these skin-to-skin practices might not be standard here in Canada, individual birthing women requesting change do add up and can result in change within the medical system. B

Kim Johnstone is an IBCLC and La Leche League Leader with a holistic health background. She is married and has three homeschooled children.

LOUISE DUMAS’ ESSENTIAL PRACTICES FOR THE FIRST HOURS OF LIFE:

1. There should be immediate and uninterrupted skin-to-skin for the first one to two hours after birth, unless a medical situation absolutely requires it.

2. Any procedures such as vitamin K injection, application of erythromycin, and weighing/measuring should be delayed until after this time.

3. The environment should be calm and respectful, and the mother should have effective support.

4. Following the birth, the baby should not receive any medically-unjustified supplementation and should room in with his mother 24 hours a day.

5. All exams should be done in the mother’s room.