It seems a month doesn’t go by in Calgary without a report in the news media or on social media that a woman and child have been asked to move, or to cover up, while breastfeeding in public.

Recent incidents include: complaints from other patrons when a woman breastfed her baby while watching a film at a local theatre, a mother who was told she’d have to leave the store to breastfeed when she took her baby for photographs at a Walmart photo studio, a breastfeeding mother and child asked to go breastfeed in the change room of the Talisman Centre, and a furore that arose when a local radio station compared breastfeeding in public to nose-picking.

The right to breastfeed is protected under Canada’s Charter of Rights and Freedoms, Alberta’s Human Rights Act, and the United Nations Convention on the rights of the child which was ratified by Canada in 1991. The Public Health Agency of Canada and Alberta Health Services encourage women to breastfeed “Anytime, anywhere.”

Most women report they have never experienced harassment while breastfeeding in public, but it does occur, and for every incident that makes the news there are many more that are never reported, or that are resolved quietly. Being asked to move, cover up or leave can have an emotionally devastating toll on a family. Some mothers, having heard of these incidents in the news, choose to never breastfeed outside of the home.

A recent University of Alberta study1 found that while over 90 per cent of Alberta women start out breastfeeding, many don’t continue to breastfeed exclusively to the six-month mark as recommended by health authorities. Researchers identified lack of public support for breastfeeding as one factor leading to early weaning. Clearly this is an important issue.

Alberta was once singled out as the least welcoming place in Canada for breastfeeding women, but the last decade has seen a significant shift in public attitudes. Women have been standing up (and nursing in) for the right to breastfeed their children in public. Many more public places and businesses now have specific policies in place to support and protect breastfeeding women and children. It’s a good thing too. We have over 50 000 babies being born each year in the province!

There are many possible actions you can take to stand up for your rights. Here are some steps that can turn an unfortunate incident into a win-win for all involved. You don’t have to take all or any of the actions here to take a stand. Simply continuing to breastfeed in public helps normalize it and makes a big difference! As the Alberta Breastfeeding Committee’s card says:

“Thank you for breastfeeding your child in public! May future mothers never have to search for a secluded corner, dressing room or restroom to nourish their babies. Breastfeeding in Alberta is becoming the norm and the credit goes to women like you!”

If you are singled out in public and told that your breastfeeding isn’t allowed, that you must cover up, or move to a washroom, what can you do?

How to support a friend who is harassed for breastfeeding in public: 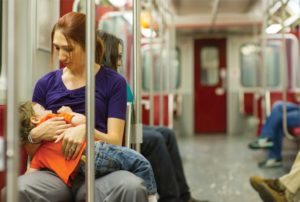 First, the worst thing you can say is, “I breastfed all my children everywhere and that never happened to me!” Especially if you follow it up with, “Oh, but I was always discreet/wore a cover/never showed any breast.” It HAS happened to this mom, and suggesting that she should have done something different or that she caused it to happen is victim blaming. Instead, try, “I’m so sorry this happened to you! I breastfed my children in public and this never happened to me, but if it had, I think I would have felt angry, or maybe even ashamed! How did it make you feel?” The majority of women report feeling angry or frustrated when they encounter breastfeeding discrimination, but a smaller number say they feel violated, or feel shame. These are the women we worry about the most, because lack of support is a leading reason for early weaning.

Many of us feel anger when we hear about another women experiencing discrimination for breastfeeding and we want to take action to right the wrong. It’s important not to rush to action. Check in with the mom first and make sure she’s well supported, and that she wants to take things further. This is especially important if there is media coverage — many women face further harassment when their stories are told in public. Having lots of support can be vital to avoid being further victimized. You can help by outlining some of her options, and pointing her in the right direction if she wants to file a complaint or resolve the issue by connecting with management. If she doesn’t want to be in the limelight, don’t push it. There are lots of other ways for you to support the cause, including a donation or volunteering with your local breastfeeding advocacy organization. And if she wants help to organize a complaint or a protest, by all means, let her know you’ve got her back. Round up a network to help her take the steps necessary for a successful resolution. Then you can follow-up with a breastfeeding celebration! B