Breastfeeding is the biologically normal way to feed human babies. However, negative attitudes towards breastfeeding in public are still a barrier to breastfeeding for many women. Meeting our babies’ most basic need should not be fraught with anxiety. We have successfully changed attitudes before – women can vote now after all. Teresa Pitman reveals why it is so important to nurse our babies anytime, anywhere and explains how to do it.

I arrived at the amusement park north of Toronto with my two kids (ages four and two), the little girl I babysat while her mother was at work, and my six week-old baby, ready for a day of fun. At six weeks, little Daniel nursed frequently – and it was so warm that day that he was probably nursing more often than usual. No problem. I walked through the ride line-up with the older children, made sure they were securely strapped in, and headed to a bench near the exit with my baby. I took him out of his baby carrier, lifted up the bottom of my T-shirt and latched him on. Within two minutes, a large, annoyed looking security guard was standing over me.

Do what? I thought. Was this a restricted bench or something – only to be used by park employees?

“We have a special nursing room in the baby centre on the other side of the park. You have to go there.”

Oh. He was talking about breastfeeding.

I had three young children who would be coming out the exit from a ride within a few minutes, so walking across the park just to feed my baby didn’t seem very practical (or safe). And given the frequency of little Daniel’s feedings, we’d be spending the entire day hurrying back to the baby centre. On the other hand, this security guard seemed pretty determined.

My solution: I pretended I didn’t speak English. I shrugged and shook my head to show that I didn’t understand. The guard yelled at me a few more times but eventually gave up and walked away. Daniel finished nursing soon after the older kids came off the ride and we happily continued our tour of the parks. We nursed many more times that day, never once heading for the special nursing room.

I don’t know if I’d have used the same strategy today. For example, today I know more about my rights as a breastfeeding mother.

I know that the Ontario Human Rights Commission states:

“You have rights as a nursing mother. For example, you have the right to breastfeed a child in a public area. No one should prevent you from nursing your child simply because you are in a public area. They should not ask you to ‘cover up’, disturb you, or ask you to move to another area that is more ‘discreet’.” I know that the BC Ministry of the Attorney General says: “Nursing mothers have the right to breastfeed their children in a public area, and it is discriminatory to ask them to cover up or breastfeed somewhere else.” Other provinces may not have issued specific statements, but it seems likely that mothers and babies have the same rights across the country. After all, the Gwen Jacobs case gave women in Canada the right to go completely topless anywhere men are entitled to be topless, so it’s hard to see how breastfeeding could be a problem!

Yet, sadly, women are still sometimes made to feel uncomfortable about nursing their babies wherever they need to be. We still hear frequent reports of nursing mothers being asked to leave stores, restaurants, swimming pools, change rooms, daycare centres, classrooms, etc. A recent study surveyed university aged young men and women in New Brunswick and Nova Scotia, asking them how they felt about breastfeeding in public places. All said they hoped their future children would be breastfed, but the vast majority said public breastfeeding was “only okay if discreet,” “should use the washroom,” and other negative comments. Only 15% expressed positive, unrestricted statements about breastfeeding in public.

Changing these attitudes is crucial. We know from many surveys and studies that anxiety about breastfeeding in public is a major factor for many women who decide to bottle feed. It’s also often a factor when women decide to wean early: who wants to spend months, even years, restricted to the house or, alternatively, having to make elaborate arrangements (pumping, preparing bottles, persuading the baby to take the bottle, etc.) in order to do something as simple as eat in a restaurant or buy groceries?

In recent years, there have been a number of “breastfeeding covers” on the market with names like “Hooter Hiders.” That may sound like a good solution to some mothers, but there are many problems with this concept.

First, the cover announces to the world “breastfeeding is going on here – and I think it is kind of embarrassing, possibly obscene, possibly disgusting, so I am covering up my entire chest and the baby.”

Second, many, many babies object to having their heads covered by a blanket or cloth drape while they are eating. (Most adults don’t like it, either.) Covers also make it very tricky for a new mom who may really need to see her baby to help him latch on. Often the baby will pull the cover off, or attempt to, or may refuse to nurse with it in place. On hot days, covers can be very uncomfortable for both mom and baby.

Third, we know that it’s important for young women to see breastfeeding in order to learn that it’s the normal way to feed a baby, and to learn how to do it when they have their own babies. When mothers use covers, it makes breastfeeding invisible. Young women (and men) see only babies getting bottles, and they absorb the message that bottle-feeding is the standard. They also are unconsciously getting ideas about how to hold babies for feeding – in positions that can work for giving a bottle but that create problems for breastfeeding.

Frankly, I find the name “Hooter Hider” kind of offensive. Why is it that only breastfeeding mothers have to hide their “hooters?” Breasts are used in advertising to sell everything from cars to beer and there’s plenty of skin showing in many of the outfits women wear. It’s really not the breasts people are objecting to (because a nursing baby covers far more than the average teen girl’s tank top): it’s the act of breastfeeding. People are made uncomfortable by this simple act of nurturing a baby.

So what can be done? I’m reminded that we’ve been through this kind of thing before. In the late 1800s, it was considered scandalous for a man to see a woman’s ankle or leg. It would be much too sexually stimulating. Even table legs were sometimes covered, and were always carefully referred to as “table limbs” so that they wouldn’t make those sensitive men think of the forbidden female leg. 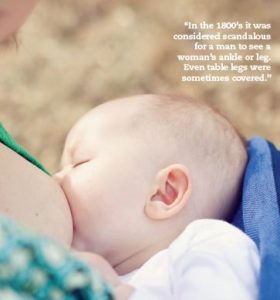 This need to keep every inch of their legs covered made life harder for women. You can’t run easily in skirts long enough to cover your ankles – you even had to be careful walking.

Eventually, women got fed up with the whole thing. They started wearing divided skirts, and shorter skirts, and even pants. I’m sure there were people who were shocked in the beginning, but today we don’t give it a second thought. People got used to it.

I think we need to help people get used to seeing breastfeeding in public, too. There are only benefits: it will encourage new mothers to breastfeed and help them know how to do it, it will ensure babies are fed when and where they need to, and it will help women breastfeed longer and more exclusively. The more women who nurse whenever their babies are hungry, wherever they happen to be, the more quickly we’ll get to that day. But, wait, wait, you may be saying. I’m breastfeeding, but I just don’t feel comfortable nursing in public. I know it would really upset me if someone told me to move or cover up. I don’t want to change the world – I just want to feed my baby.

That’s okay, too. Here are a few tips to make breastfeeding in public a bit easier when you’re feeling a bit shy about it:

Pick Your Spot (and no, I don’t think a public washroom is a suitable place to feed a baby) In a restaurant, see if you can get a seat on the inside of a booth, or at a table where you are facing a wall and have your back to most other diners. In a mall you may be able to use a change room.

Dress in Layers A tank top with a loose, unbuttoned shirt on top will let you pull up the tank to nurse, while the shirt will cover most of you. (Again, this doesn’t work with all babies – some hate the fabric touching them.) A loose T-shirt that you pull up can work, too, perhaps worn with a belly band to cover your post-partum tummy. You might want to practise at home in front of a mirror so you feel more confident.

Surround Yourself with Support, at least in the beginning. If you have your partner, or some friends or other nursing mothers with you, you won’t feel so embarrassed and alone if someone does approach you to complain. Your companions can speak up for you, while you just smile and continue on with the normal, ordinary, everyday act of feeding your baby. And I hope that one day soon, that’s all it will be.

Teresa Pitman has been a La Leche League Leader for more than 30 years. She writes about breastfeeding, birth, parenting and related topics for national magazines and is the author or co-author of 14 published books.