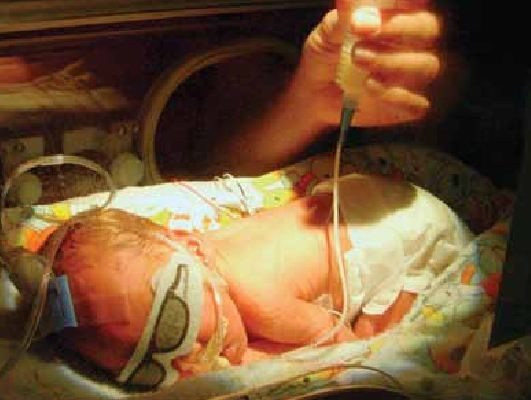 Almost five years have passed since I learned the true meaning of helplessness.  An evening that started with a romantic comedy and some popcorn quickly turned into an emotional prizefight in which I was being battered.  Learned instincts tell men to fight back in these types of situations, but there was no opponent to be seen.  My inability to fight this invisible adversary was forcing me to break my first parental oath as “protector” though I hadn’t yet met my firstborn.  My child was in danger, and there was nothing I could do to stop it.  Our battle with preterm labour was just beginning.

As we were getting ready for bed earlier that evening, my wife Rebecca noticed that she was leaking a bit of fluid (please forgive my medically incorrect terminology throughout this story).  We were obviously concerned and thought it best to go to the hospital for tests, “just to be safe.”  We were not prepared for the whirlwind that followed throughout the early morning as this information is just not found in pamphlets, brochures, or magazines. 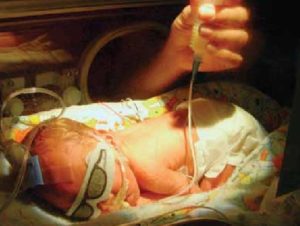 We were soon told that my wife had ruptured a membrane and was in danger of going into labor at 27 weeks.  A parade of strangers entered our room with calm bedside manner but obvious urgency.  After hours of checks and tests, she and I sat confused and exhausted behind a curtain for several hours watching a baby monitoring device we didn’t truly understand.  My attempts at soothing my wife’s concern resulted in a series of unconvincing lines.

“Everything will be alright.” …“There’s nothing to worry about.”

It was a cold, sterile nightmare and the most perplexing antagonist was about to arrive.

In retrospect, the counselor that came to speak with us at that point may have been the human embodiment of compassion.  That evening, though, she was an angel with the devil’s tongue.  Her sincere empathy and concern was quickly erased by a frightening series of truths about preterm labour and what could happen if our baby were to be born today.  As a counselor for children with severe mental and physical disabilities at the time, I recognized some of what she was saying.  I had cases to match each outlook.

I don’t remember going so long in my life without breathing or blinking.  I also don’t remember sharing an optimistic word with my wife, though chapters of concern were expressed through a squeeze of the hand.  Our best hope, we were told, lay in our 1.5 pound baby’s strength in an increasingly hostile environment and ability to “hold on.”

That evening, we learned that our tiny baby was a boy.  The granting of Daddy’s wish was the birth of optimism and newfound hope.  We decided that we were capable of whatever challenges lay ahead.  My extraordinary wife settled into a hospital bed in a shared room for “as long as he wants me to.”  I began my journey to redefine my gendered perception of strength and protection.

Strength is a vibrant young woman staying in bed for 45 days for her future child.

Strength is ignoring doubt, speaking fears, and daring to hope.

Strength is hearing “he’s not breathing” in the delivery room and telling you’re wife, “he’s gonna be fine.”

Our little miracle entered this world quickly and gave us a scare before beginning his battle to survive in the outside world.  Aided by the wonderful nurses of the NICU, he required a ventilator to breathe and an IV to eat.  He looked more like a science experiment to me, initially, but I naturally began to see past the tubes and wires.  Though my wife and I could not hold him at first, we gently caressed him through a hole in his incubator and waited for signs of humanity.

In these moments I looked at my son and marveled at his will to survive.  Tears overcame me often as I gazed at him admirably and thanked him for his inner strength, something I wouldn’t have been so conscious of 3 months earlier.  Though he stretched only from my fingertips to just past my wrist, my two pound boy was the toughest kid I knew.  The nurses called my son “the star of the NICU.”  He was growing slowly and building his physical strength. When Rebecca and I could take him on our chests and snuggle flesh to flesh, the bond between us all grew exponentially.  His soft, warm skin soothed me more than I can express in words.

We brought our little boy home after he spent thirty days in the hospital, seventy-five total for Rebecca and I.  He repeatedly met milestones and started flashing smiles.  Rebecca and I used every moment possible to enjoy the untimed snuggle time.  One evening while playing on the bed, we received a phone call reminder that our birthing classes began next week.  We both had a great laugh at that one. 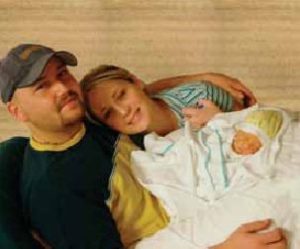 My son Payten will turn 5 in September and he is everything we wished him to be.  He’s a tough-willed, brilliant little thirty-pound lightweight.  He has to stop every once in a while to take a deep breath when he is playing too hard, but it only slows him for a few seconds.

I write this now because my wife is expecting our second child.  We were told that if we wait 3 years, the chance of preterm labor is only about 30%.  We remind ourselves of what we have gone through and how lucky we were.  We deal with a lot more “what ifs” when thinking about the baby and worry that we may be challenged again by an early arrival.  We are also calmed by the fact that we know we have the ability to deal with whatever comes our way.  I am no longer afraid of the unknown.

I am experiencing the full spectrum of emotions that naturally comes with awaiting a new addition.  At times, my excitement borders on giddiness.  It comforts me to know that I now have the emotional strength to deal with whatever is thrown my way.  Men are taught to be tough and not to show emotion.  I will teach my children that true strength is not how much you can lift… but how well you lift up others when you can barely lift yourself.

Payten can’t wait to be a big brother.