On November 23rd, 2009 I awoke around 2:00 a.m. with mild contractions that were seven minutes apart. This kept going until 6:00 or 7:00 a.m. I called my midwife JoanMargaret to tell her what was happening. She encouraged me to nap. I scrambled through the baby name book for a name that popped into my head upon waking. I found the name and loved the meaning of it but it only appeared in masculine. I held on to the fact that I was satisfied with the meaning and went about trying to take a nap.

I was very happy to be in labour and that it happened naturally as I was a little overdue now. I had taken some natural and homeopathic remedies to encourage labour, which my midwife said only works when the body is truly ready. I guess my time had come. 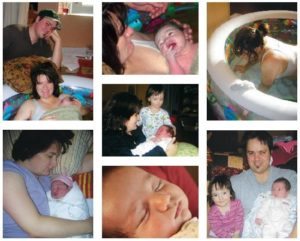 My husband’s mother and sister were staying with us and had come from Pennsylvania for the birth. At this time I was not sure if I was going to have my two-year-old present for the birth so I had a back-up play-date arranged for her. James took her and our company out when JoanMargaret strongly encouraged that everyone leave the house so I could progress in labour. As soon as the house was cleared, my contractions got more intense and were now five minutes apart. The contractions were too intense lying down and I could no longer cope just breathing. Moving around was much easier and effective. I telephoned Audrey, a trustworthy neighbour, who came over to be with me while James was gone. We chatted through my contractions, which was really nice and her light hearted presence was so reassuring. She left when James returned.

Labour was intensifying quite a bit now. I told James to call the midwife. I was labouring in the living room. I tapped into some of the techniques learned in our birth refresher course and they were actually working. James was busy getting things ready. He did not need any reminders to follow the instructions I had on notes in the kitchen. I was impressed with James and I think he was impressed with me. I was not panicking or freaking out; rather I was peaceful and enjoying the experience. I was managing the contractions one by one and on my own up until that point.

As contractions intensified, I started asking for James’ help. Then around 10:30 a.m. Christy, our midwife, appeared at the house with many bags in her arms and a cheerful smile on her face. She was so professional in everything she did and so respectful of the sacred birthplace I had prepared. She checked my cervix and announced I was already five to six centimetres dilated. I shouted a loud “woo-hoo”.

Rocking helped me cope with the more intense contractions. I actually needed James’ hand-holding and reassurance the most. He gave me sips of water with each contraction. I also used a smooth stone which I rubbed while counting at times. Other times I petted my cats or read the words on my encouragement sheets taped to the wall.

Christy saw that I was getting quite hot so she waved the door to provide some fresh air for me. I was now using the back of the couch to cope with contractions, leaning over and rocking my feet back and

forth. For some reason during the labour I really enjoyed the way my feet looked when I rocked back and forth.

Some contractions were piggy-back style and sometimes three in a row. The most effective and strongest contractions were on the toilet or using a small stool to squat on. At a certain point, I told Christy that I really needed to pee. She recognized that as a sign my water was about to burst. She showed me certain positions to encourage the water breaking. By now the contractions are so intense that I was very deep into them. I was still aware of my home and my surroundings to a point, but they were so comforting to me that I was allowed to slip into a state of awareness of my body that I have never experienced. I was very effective in coping and allowing the baby to drop further and further down the birth canal.

Then during the transition phase, feeling a bit panicked momentarily, I asked James for a homeopathic remedy called “rescue remedy ” which he sprayed in my mouth. It calmed me instantly and I was able to maintain control of the contractions. At this time Christy told me to get into the pool. I was surprised this was happening so fast. I had not even had the opportunity to use my iPod which I had prepared for a long labour. But this was not going to be a long labour. When I got in the water, it felt so nice. I said to myself “Sara, you are doing this!!”

The contractions intensified even more and in minutes I had an urge to push. It was a spontaneous urge which was a feeling I never had with my first delivery because of drug interventions. I was positioned on all fours. I then let out a huge roar like a lion with the next contraction!! With two pushes I popped the bag of waters. James was helping me cope by continuing to give me water to drink and by drizzling water on my back. The midwife then repositioned me for delivery. James stood behind me outside the pool.

Pushing was very hard, definitely the hardest point. By now a second midwife, Patty, was present. At one point, she told me to reach down and feel my baby’s head coming out. I felt lots of wavy long hair and it was a thrill to experience. This encouraged me to keep on pushing until the job was done. I pushed for 25 minutes and at 1:50 p.m. I birthed my baby.

I cannot remember the space of time between the last push and having my baby on my chest but having my baby on my chest was the best feeling in the world. I turned the baby over and saw that she was a girl which I proudly announced. Even though we had not decided on a baby’s name, when I saw my girl, I automatically whispered her name, “Aurelia” to her. It was perfect. She opened her eyes immediately and gazed up at me and James and was starting to put her hands in her mouth. What a high moment! We were all alert and awake so we could fully take in the experience. Having done things naturally, my brain was able to release the hormones necessary for each part of the birth including the natural high associated with love and protection for the baby.

Christy waited for the cord to stop pulsing until she handed me the scissors and I cut the cord. I waited about ten minutes for my placenta to come out naturally with one push. Then Patty took the baby and wrapped her in warm towels from the dryer. I was helped out of the pool and onto the couch where I too was wrapped in warm blankets since I had started shaking quite a bit getting out of the pool. Aurelia was given to me and Christy got her to latch to the breast. She drank right away which gave me such pleasure.

I did not pay much attention to what went on around me after that as I was so focused on falling in love with my new baby. Eventually I was moved to my own bed for some rest. Christy tidied up things and checked me after a nap. I had torn a bit but I chose not to have stitches put in. Christy gave me instructions for how I was going to be able to heal naturally. Then the baby was weighed, measured and blood tested. I guessed Aurelia’s weight perfectly, eight pounds four ounces. Everything about Aurelia was perfect.

Around 5:00 p.m. James brought Arianna home from her daylong play-date and I introduced her to her new sister. She instantly bonded. Not long afterwards, James’ mother and sister were brought home as well. What a blessing for Aurelia to be held and loved by her grandmother and auntie within hours of being born.

The total time of labour from start to finish was under 12 hours with three hours of “active” labour. This was one of the best moments of my life! Aurelia’s name means “golden”. This November day happened to be a beautiful golden day and this was realized during the labour. Her second name, Keatyn, means “the place where hawks fly”, which I believe reflects the birth being a high place. This was the name I scurried to find in the baby book in the beginning of labour and we found a feminine spelling for it.

I credit a great birth to having spent nine months of self-education on childbirth the natural way, trusting birth, trusting myself, taking a new birthing class and benefitting from homeopathic remedies. My midwives were an incredible source for me through a challenging pregnancy. Two weeks before my due date, I lost my father to lung cancer. This was very troubling not only because of the death but that I chose not to go to the funeral due to risks associated with extensive traveling. Thanks to a great support network, I was able to grieve as well as ready myself for the birth. This balancing act between life and death was a lot of work!

Finally, home birth certainly is extra work but well worth it. I’ve always believed that anything in life that is valuable takes work. I experienced a dream birth. This is a high point I will not soon forget – the place where hawks fly!