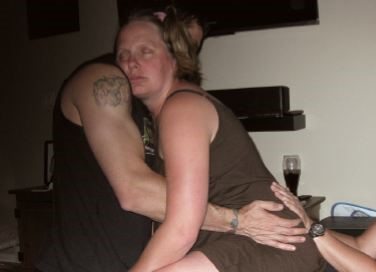 Your father went into Banff on Friday July 25th, 2008 in the evening. He rode his motorcycle out there in case he needed to get back quickly to me.  I had a feeling the contractions would start that evening, so I asked your Nana to go to the movies with me as a distraction.

Once I got home I lost my mucous plug and contractions continued.  I called your Dad at 10:30pm to give him an update, but progression seemed slow.  I told him he didn’t have to come home yet, but he did.

On Saturday the contractions started getting more intense, and Daddy started using his Bradley coaching to help me change positions and relax and breathe. This went on most of the day, and at around 6:00pm we called the midwives to warn them that we were getting close. 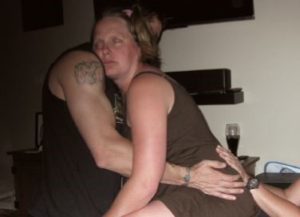 We are supposed to call the midwives when the contractions were four minutes apart, one minute in length and this goes on for one hour.  Well we were certainly there around 8:30pm on Saturday night and Christie came by to check us out.  I was three centimetres dilated and 70% effaced.  As soon as she arrived my contractions virtually stopped all together. I believe it was performance anxiety.  She left around midnight and we tried to sleep.  Well, the contractions kept going strong.

At 4:30 am we called her again and she drove to our house. She arrived and my labour stalled yet again. At this point I found myself faking the contractions because I was so embarrassed that they stalled again.  I was three to four centimetres dilated and 90% effaced.  She asked me if I had any emotional issues to deal with that may be stalling the labour. Was I nervous about being a mom, did I have anything bothering me with our relationship?  You father and I talked about it in depth after she left and came up with nothing.

Christie also suggested I carry around a doll to see if it brought up any feelings I was unaware of. Carrying around that doll was really interesting because it did indeed make me cry, but only with anticipation. She left again at 6:30am after giving me a shot of gravol, in hope that we get some sleep.  I did not sleep, and had to continue my contractions very groggy and fuzzy. But your father had the opportunity to sleep for 50 minutes, so it helped refresh him slightly. 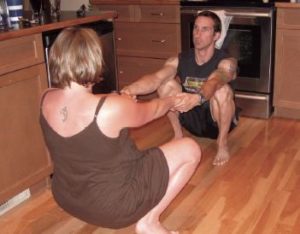 work.  Christie used the Doppler to check your heart rate every 10 minutes to ensure you weren’t in any distress.  She asked us to run up and down the stairs from 7:00pm to 9:00pm to help with the progression and dilation.

I got in the shower at 9:30pm to help ease the pain, then moved to the tub thinking we were about to start pushing. We tried the bath tub at about 9:40pm which stalled the contractions yet again.  We finally got out after a temporary reprieve from the pain.

At 10:45 pm,  another internal exam. I was 100% effaced but only four to five centimetres dilated, though she was generous when she told us, saying she could stretch it to six centimetres.  She also said that average women can dilate half to one centimetre per hour. If we were at five, then that was still five hours away! I lost all enthusiasm and if it weren’t for your Dad and Christie being so positive I surely would have given up.

This is when Christie discovered that I had ruptured my hind waters earlier and my membranes were intact for the fore waters. She ruptured my membranes and I remember this intensified the pain of the future contractions. I found rupturing my membranes was extremely painful in itself.  Your head was cocked a little so you weren’t dropping onto the cervix like we would have hoped, so dilation was painfully slow.

We utilized every position to ease labour.  At some point Christie asked me if I felt like pushing. I did, but I still felt the pain in my abdomen so I felt like I still had cervix left and wouldn’t go to push until I was certain it was time.  I couldn’t take any more disappointments.

She tested my keytones around 7:00pm and told me I had been labouring for too long without nourishment. The test suggested my organs could possibly start shutting down if I didn’t eat something. I tried to get some frozen grapes down, but I hated having them in my mouth when a contraction hit. At one point I did spit the grape onto Daddy’s shoulder as the contraction started.

I was delirious at this point. After a number of contractions that I most certainly was pushing through, we headed upstairs to the spare bedroom.  This was around 3:00am on July 28th. She set me up inclined against the bed with my legs up.   I completely forgot how to push, but I do remember how difficult it was to use my energy to push instead of making loud verbal noises.  I didn’t mind the pushing at all! I felt like I was actually doing something productive. I couldn’t believe how hard it was to hold my breath that long, and I couldn’t believe how fast the time seemed to fly.

Nana was videotaping the birth as well as supplying my head with a cool washcloth.  I remember whenever I was getting ready to push the washcloth was a huge annoyance so I started flinging it across the room which is how everyone knew I was about ready to push again. I was operating on autopilot at this point. I know that Christie set up all her equipment as if something was going to go wrong. I think she was anticipating a little trouble because we had been at this so long.

I just kept pushing.  Finally I heard someone say they started to see the head. I know that as I was pushing I was concentrating so hard on keeping the pushing in my bottom that at a certain point I would pull back. Finally Christie said just keep pushing. So I would push for most of the time in my bottom and then it would switch into my head and I couldn’t control it. This was when I made the most progress. 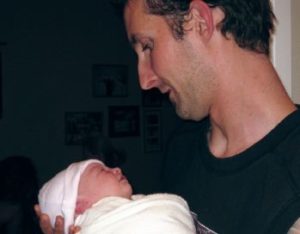 The time to me flew by. Your head was crowning and then all of a sudden Michael was up at my face kissing me and crying. Christie had coached your Dad to hold onto your head and shoulders and with the next push he twisted your shoulders and out you popped. Daddy immediately placed you on my stomach. I looked bewildered.  I didn’t know he had pulled you out and put you on my stomach. It was done! You were finally born!

You weren’t crying, just making little noises so Cassie instructed me to pound your back. She said this isn’t a time to be gentle.  So we did some pounding and encouraging to you to start crying, and finally she took you away to suction your lungs and they did have to cut the cord at that point, but Daddy got to cut it.

Once your lungs were cleared they returned you to me and we tried to nurse with Christie’s help. Well, I was so exhausted that I couldn’t even hold you, so she helped me hold you and you were so stunned that you weren’t interested either, so after trying for a short while, they wrapped you up and weighed you and I had to concentrate on the placenta.

Daddy got to hold you while I birthed the placenta. When Christie suggested it would be a shame to have to go to the hospital after all this because the placenta wouldn’t come,  I immediately snapped to attention. I asked them what I could do to help. They suggested nipple stimulation and squatting. I found a burst of energy and headed to a squat position. Not long afterwards the placenta was born (I found this part absolutely pain free) and it was all over.

Everyone left by 6:00am and I went to sleep while Daddy took you downstairs. After some sleep, we tried breastfeeding again with great success.

Would I do it like that again? If I had known what was coming, probably not with as much enthusiasm. But the greatest thing about any birth is that you have no idea how it is going to unfold. If we have a second baby, yes, I am willing to take my chances and do it the same way again. I just completed my ironman, I can do anything now. I have so much pride and respect for both your father and me because of this challenging event, it was all so worth it. And you, my dear, words can’t even describe the love and gratitude we feel for you!

It is Christie’s belief that if we had pulled the plug and gone to the hospital, they would have induced me, and with the failure to progress, somewhere around midnight they would have done a caesarean section.  We had a natural, vaginal, drug free childbirth at home only due to perseverance and incredible support! Way to go!