The journey of my pregnancy and birth with my third child was one of anticipation, joy, excitement, grief, anxiety, fear, and most of all healing. I became pregnant for the fourth time in May 2008, three months after our second daughter, Gabrielle, was stillborn at 26 weeks gestation.

She had a chromosomal condition known as Turner’s syndrome which meant she had only one X chromosome. This led to multiple medical conditions that she was unable to overcome. The night that Gabbi was born we had many questions, one of which was when, medically, could we try to get pregnant again? All our care providers told us, after one full menstrual cycle. Our midwife, Kimberley, God bless her wonderful sense of knowing, said “this time next year would be a great time to have another baby”.

It was not an easy decision to pursue another pregnancy. I knew that part of my healing was to move forward with our plans for our family. It would be a dishonour to Gabbi not try again. We had conceived our first daughter, Katie, just three months after a missed miscarriage. It was a difficult, but healing experience. With many blessings, I became pregnant that first month of trying. We were still very much grieving for Gabbi, and a part of me clung to that grief so as not to become “too attached” to this new pregnancy.

In our initial appointments with Kimberley we discussed all the available prenatal testing options. There were some strong desires at times to have an ultrasound, “for peace of mind”, but we knew that choosing testing for or reassurance also opened us up to negative results. 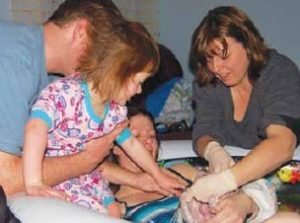 We had not had ultrasound with Gabbi either, and were grateful not to know of her illness. Throughout my pregnancy there were many discussions about it and many people had a difficult time understanding our decision. Eventually I stopped telling people that we weren’t having one. Their questions made me doubt myself and I needed to trust my body and my intuition.

I thought when the baby started moving would be the most stressful period for me. I was scared.  I thought I would be filled with anxiety every time the baby stopped moving. I certainly had anxiety, but it was much better than I expected. I truly trusted my “motherly” intuition that the baby was okay. I had a very active little one in my womb, which Gabbi had not been, and that gave me peace of mind. Although, when I felt it had been too long between movements, I still poked and prodded to wake the little one up.

Somewhere around 24 weeks I began to relax and I was able to start to put our birth plan together. I had wanted a home birth since my maternity rotation in nursing school. I had the most wonderful midwife, whom I trusted and felt comfortable with. I had some fear. My first birth was at a hospital. We had a doula and doctor that we liked. It was a natural, non-medicated birth and I vowed I would never have another baby in hospital by choice again. We had a midwife and planned a home birth with Gabrielle, but her circumstances required hospital birth as well. Fortunately, our midwife was there with us.

I began to feel that the only place I was going to have a baby was in the hospital. 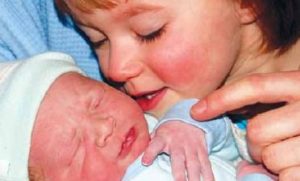 I thought of every situation that would prevent birthing this baby at home. I persevered through my fears and a fall on the ice at 33 weeks that sent us to hospital with contractions. At our 36-week home visit my team reminded me I needed to get my birth supplies ready, but I couldn’t. If babe came at that point we’d have to go to hospital anyway, so why bother? Around 38 weeks I finally got all the birth supplies together.

After supper, the night my labour started, I lit Gabbi`s candle. It was February 2; one year since we had found out she had died. I felt her with us and I wanted to acknowledge her. We put Katie to bed. I settled in on the couch with Bryan to watch a favourite show at 10:00pm. I felt this “pop” in my perineum, and thought “that’s weird” but gave it no further thought. A few minutes later I shifted my position and felt a little trickle. I had never been incontinent for urine so I was pretty sure it was amniotic fluid. Bryan wouldn’t believe me until I told him it wouldn’t stop trickling.

My water had broken at 10:15pm. We called everyone, set up the birth pool, had a bite to eat and went to bed about midnight since I wasn’t contracting yet. I knew when I went into labour it would be fast and I hoped to get a little rest first. I woke at 1:30am with regular contractions but was able to go back to sleep for another hour. Then I got up, left Bryan sleeping, and went to get food.

I was working through my contractions, swaying and breathing, eating some oatmeal in between. After about 20 minutes I didn’t want to labour alone anymore. I woke Bryan and then called Kimberley. I waited out a few more contractions before I called our doulas, Helen and Nicola. I was getting nervous and felt alone; I needed the presence of others to bring me strength.

By 3:10 am I was in the pool and Kimberley arrived. Her presence was such a relief and I was able to let go a little. Then Helen arrived, I relaxed a little more, but it wasn’t until our whole team was there that I was able to allow my labour to envelop me. I went inside myself. I recall little of what went on around me during that time, except that the fish on the side of the pool were making me mad during contractions. They were so happy and I was so uncomfortable!

My mantra through each contraction was “open” which I quietly said out loud. When I felt like the contractions might overwhelm me I told myself to trust my body, I had done this before; I knew how to do this. The strength of my husband and the women surrounding me, believing in me, allowed me to embrace my labour.

Kimberley checked my progress once, at my request. My intuition was that my labour would be fast because my first two had been. I was afraid that it would take longer than I anticipated. I was having strong back contractions, so I was pleased and relieved at the progress I had made. I had been resting on my back in the pool and suddenly I could no longer get through the contractions that way and went to my hands and knees. I was uncomfortable but I knew I was in transition.

Then came the pressure and the NEED to push. The next contraction came and I began to do so. Nobody touched me, nobody told me not to push, and I just did what I needed to do to birth my baby. Kimberley asked me to turn over, from my hands and knees to my back so that I could catch my baby more easily, then she told me to put my hand down and push my baby into it. Just three minutes later I was holding my beautiful baby in my arms. The only thing missing was Katie; she had slept through everything, as it had only been two hours of active labour. Bryan went and woke her, and she came down to help him cut her brother’s umbilical cord. It was such a natural way for her to meet her brother. Mommy never left, the baby just “came out”.

Liam Curtis Mouland was born, peacefully, at 5:03am February 3, 2009. I can only describe his birth as natural, but not in the way that most think of natural childbirth. Yes it was vaginal and unmedicated, but it was undisturbed. There was no interference, no excessive monitoring, and no time restraints, no one telling me what to do or how to do it. Liam’s birth was how birth is meant to be, mother’s instinct, supported by those who believe in her and love her.

As I lay in bed shortly after his birth, feeding my baby, I listened to my husband and daughter build a castle on the floor next to me. I felt fulfilled, but for the little hole in my heart that will always miss our angel, Gabrielle. I still grieve for her, at times painfully so, but I know that I could not have both her and Liam in my life if we had not experienced her death. I cannot imagine my life without either one. Liam’s birth brought a new level of healing to my heart and we know that Gabbi was with us, supporting us, through it. Her candle burned for two days before it went out, on February 5, the first anniversary of her birth. 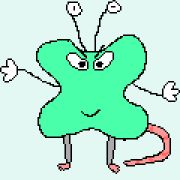 Chrissy Mouland is wife to Bryan, mother to two beautiful babies at home, Katie born Oct 17, 2006 and Liam born Feb 3, 2009, and Gabrielle, stillborn Feb 5, 2008. She is a registered nurse and a DONA certified doula, residing and working in Calgary, Alberta. This birth story was taken from our Fall 2009 issue of Birthing Magazine