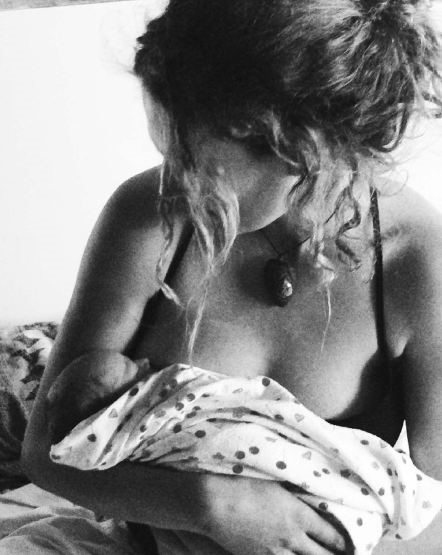 Giving birth is one of the most normal everyday kind of things, while at the same time so miraculous.  I still get spun out by the fact that a birthing woman’s body  is the exact spot in the universe that splits open and allows a new soul to come into this existence. I feel so honoured that I get to experience it at all.

For the birth of my second child, I put it out there that I wanted to experience a blissful, orgasmic, ecstatic birth. And even though I remained quite lucid throughout, and things never got as psychedelic as my first birth experience, I did get to experience birth the way nature intended.  A transformational rite of passage that equipped me with all I needed, both physically, psychologically and spiritually, to capably mother this new baby. 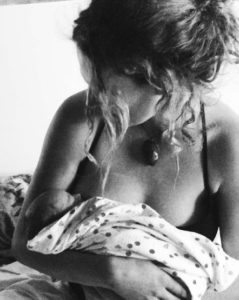 My young family and I spent the pregnancy on the move.  We moved continents while squeezing in some traveling and visiting friends along the way.

We were in Canada, on the coast of Vancouver island when my period never came. Hiking through lush rainforests with my toddler I could literally feel my cells spinning with life as this new ball of cells was doing just that and growing exponentially. I felt such a strong awareness throughout the pregnancy, completely connected to my body and this baby, which was so important for us as we moved through the act of birth.

Back in Australia, and with only two months until the expected due date, we felt the pressure to ‘nest’ and quickly found a place to rent. Setting up a house while heavily pregnant and caring for a two year old, with my husband still working full time was pretty stressful.  I struggled to gain any weight and the size of my womb remained unchanged for 3 weeks. I also came down with a fever.

Our dream property turned out to be more of a nightmare, so now, only two weeks to go, we hunted for a nest once again.  Five days before I was ‘due’ we moved. Moving all our belongings to our new place, my husband totally over exerted himself to get it all done We were fighting off colds on top of it all.  Finally however my belly began to grow again.

I believe my body and baby knew the last house was not safe and so did not get ready for labour there. I was starting to feel like an animal in the wild who will gestate for longer if there is nowhere safe to birth. After trying to get the place somewhat settled and everything organized for the month following the birth I finally had some free time. I sat down to watch a dvd my midwife had lent me (which was ironically, Orgasmic birth). After about 15 minutes the familiar achy  sensations, that felt to me like a deep yearning for this baby, began.  I quickly turned off the dvd and hopped into bed, the line ‘false labour stops if you lie down’ playing over and over in my head.

After a few hours of sleep I woke to what I could no longer deny was in fact proper rushes, or contractions. It was all pretty easy going and so far apart, I was still firmly in my thinking brain as well, so I was sure it was going to be quite some time (a whole day even) before we got to meet our newest family member.  Leaving my husband sleeping in bed,  I went to get everything ready for birth. I hadn’t even blown up the birth pool yet.  I took it out to the car, blew it up with the cigarette lighter pump (I had to turn the car on and a Lee Perry album was playing on the stereo. I felt a strong connection to the music and it became the soundtrack for my labour groove), brought it back inside and them rolled it up the stairs.  I was having pretty intense rushes the whole time, but it didn’t seem to slow me down any. Only when I had the pool upstairs did I realize that the bottom needed inflating too. The bike pump’s attachment was too large, so back down the stairs; outside to the car and then back up again, the birth pool and I went.

After finally getting the pool in place along with all the sheets and towels and other birth ‘gear’ I curled up on the couch to rest. The time between rushes had not increased and if the rushes themselves had increases in intensity I hadn’t noticed. I was able to doze off to sleep, wake up, have a rush, go back to sleep.  That went on for about an hour or two. After one rush, I stood up and swoosh… my waters broke.  It made a surprising loud ‘plop’ sound and took me by surprise (as my first baby was born in her caul, I had no idea what waters breaking would feel like). My husband heard it all, and called out ‘Call the midwife now!”

On the phone to the midwife I was still quite rational and chatty, stopping only to breath through a rush. She said she’d make her way over.  I went upstairs again to fill the pool.  I couldn’t figure out how to get the hose to attach the tap in the bathroom and things were beginning to heat up. I now had to get down on my hands and knees. I gave up on the whole filling the birth pool idea, hoping lianne would deal with when she got to the house. I started to feel the urge to push, so went downstairs to run myself a bath, where I figured I would hang out and wait for lianne to arrive.

I turned the stereo on in the house and cued the same album that had been playing in the car and organizing a nice little labour playlist for myself, with a few hours of music on it, thinking id be pushing by the time the last album, bob marley’s Kaya, played.

The bath was full and I was so badly ready to push, I had been feeling the baby sliding it’s way down the birth canal for awhile now.  In  the bath I put my hand inside myself to check how far down the head was and if my cervix was fully open… It felt like the baby was about to fall out, but it wasn’t all hard like a head should be, it felt more soft and squishing with a little lumpy node (which I assumed was my cervix) slightly off centre.  I thought to myself, I don’t care if I get a prolapsed uterus because of this- every part of my being is telling me to push. Kneeling into the water, with my head under and my shins along the bottom of the bath, I went with it and pushed.

I could feel the baby sliding out. It felt good, and then as she slid out further the craziest thing happened: her legs uncurled and her little arms began to move around. I had just birthed her bum! A breech baby! What a trip, it didn’t faze me in the slightest though, I was completely chilled out while at the same time remembering everything I’d ever read and heard about breech birth (which was quite a lot actually, as educating myself about natural childbirth is a bit of a hobby of mine). I came back up onto all fours, and felt between her legs to see what sex our baby was. A little girl.

When I’d been feeling what I thought was my cervix I’d actually been feeling her labia instead. It seemed like there was a lot of time between rushes for me to process all of this.  Feeling her moving of her own accord reassured me that she was fine, but I did think that I shouldn’t mess around and get the head out fully next rush.

Then I felt the rush come over me, squatted back in the water with my head under and whoosh, Kirra was born. It had all happened so quick.  I was alone in the bathtub in the dark. I called upstairs to mike, come down here NOW. I didn’t want to freak him out by saying the baby’s arrived, but I did want him there right away.

I sat back as Kirra swum around, I unwrapped the cord from her neck and my beloved joined us in the bathroom. He wondered if she was okay, I assured him she was as we lifted her out and she took her first breaths. It was a lot to get our heads around. A little girl, who came out a surprise breech and I did it completely unassisted after only four hours of labour. The stereo was playing, only the second or third song since I started it. Mike wrapped Kirra up in a towel on my chest and set up some heaters in the bathroom. Some more time passed and then Lianne joined us. She then told me that as she listened to me experience that rush on the phone, she new she wouldn’t make it in time. We talked awhile as mike went outside to chop firewood. We talked about how efficient my body was and how I felt let down that I never got to that transcendental state I was expecting.  How even though my primal animal instincts were strong and helped me birth, I never fully got out of my thinking brain. I’m pretty sure we hung out in the bathroom for about an hour waiting for the placenta. It felt good to push out, but a little piece of membrane stayed attached for ages. It was hard work to let it go. Lianne suggested it was my body’s way of not fully letting go of the pregnancy, I had to really focus and accept that before it separated.

Even though I did not experience an totally out of this world, estactic and orgasmic birth, Kirra’s birth was still pretty amazing and there has been plenty of bliss since.  There was much bliss in curling up by the fireplace after getting out of the bath, early morning sunlight streaming in, Kirra sleeping softly on the couch above me, her placenta still attached and keeping her company.  There was much bliss in having such a skilled and capable midwife caring for us postpartum. There was much bliss in relishing a heavenly goji berry, papaya and tahini porridge as my first post birth meal.

There was absolute and total bliss in staying at home to birth, creating a sacred and safe place for our baby to enter the world. And as I look back and integrate the whole experience I realize now that Kirra’s birth rebirthed me. I feel a renewed sense of love and duty to the whole world and I feel like a newly wed with my husband again.  I am so completed and utterly in love with the little newborn babe, even through the long nights, were she doesn’t stop breastfeeding, at all. And I realize now that this state of bliss comes from the uninterrupted flow of hormones that began when Kirra signaled to my body that she was ready to come out. The flow of hormones and endorphins that was supported by choosing homebirth, an intervention free pregnancy, and trusting my body completely.  I am grateful and I am empowered and I am oh so blissful.