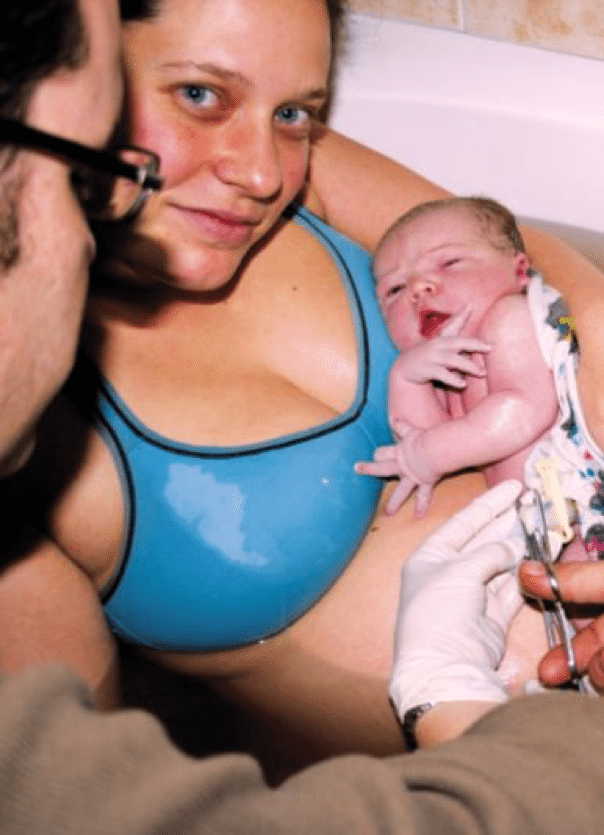 My fourth little one was born at home. She was my first home-birthed baby. My first was a c-section due to breech, my second and third (twins) were a breech hospital vbac. With baby four, we decided to go with midwives for the personal relationship and their acceptance of our desire for a natural birth. When the time came, our home seemed the right place for our baby to be born.

I had prodromal labour starting Wednesday night, which would promptly go away when the sun rose. Friday morning it stayed and my contractions got stronger and closer together. By early afternoon I knew it was the real thing and I sent my hubby out to buy a video camera as ours had stopped working. He ended up running some errands and doing some banking. By the time he made it to the store it was evening and starting to blizzard. My contractions were getting closer and closer, so I told him he should come home and he said he just had to go get the camera. I was surprised he hadn’t gone yet. When he got there they were all sold out of the one we had picked that was on sale, so I told him to get the next one up and to hurry home. Labour was in full force. For some reason he thought I was still having false labour and I had to explain NO the baby was on its way! He proceeded to go through several choices of cameras and they were all sold out and then he ran to another store in the area but couldn’t find one. The store wanted to send him to another location about 20 minutes away but since it was blizzarding and I was in labour we decided that was a bad idea so he ended up getting one that was twice our budgeted amount!

By the time he got home, I had been dealing with labour most of the day alone, but doing quite well. A whole different level of relaxation was possible at home compared to my previous hospital birth. I was on a roll. I was kneeling over and using an ice pack on my back during contractions. My parents had been over watching the kids and we decided it was time for bed and time to call the midwives. The midwife on call wanted to talk to me. I paused briefly at the peak of a contraction to breathe and then continued our conversation. She said I should get some rest and call them when I could no longer talk through contractions. I lay on the bed for a while.

About 15 minutes later, I decided to get in the bath as it was cold in our room and my feet and hands were chilly. When I stood up the baby moved way down and I had a ton of pressure. I knew the baby was coming right away. My husband frantically called the midwife again, explaining the pressure I was feeling and that she had to come right away.  Kneeling over the edge of the tub, I realized I was in transition as I started shaking and had some bloody show. With every movement I would have another contraction. With every contraction the baby would move way down to come out.  I could not get out of the tub. I could not stand. I could not move as my body was pushing the baby out. Our midwives were rushing to get to us but the blizzard was a white-out by then and it was not easy. On the phone the midwife was trying to explain what my husband should do in the event of an unassisted birth, but I just wanted her there. They were all telling me not to push but it was my body and the contractions that were pushing! The midwife told them to send my Dad outside to retrieve her bag when she arrived. I thought the baby was coming as I felt her crowning but it was her bag of water which came first and broke, giving us five more minutes. The midwife arrived very quickly. My mom says she came running in, skidding up the stairs to us.

It took me a minute to realize she was there and I could let go and relax. I had been trying not to push and trying to hold the baby in but it was not working. A moment later right after the second midwife arrived, I relaxed and our baby was born into a nice warm bath with a raging blizzard outside. We didn’t know if it was a girl or a boy. I told my husband to wake the kids so the oldest could check and see. The baby lay on my chest with a warm wet receiving blanket over us. My oldest daughter (6) would not come in to the room as I had delivered the placenta in the tub and the water was a little red with that bit of blood. She thought the whole tub was full of blood. So our other daughter (4) came right in and told us the baby was a girl. Our son (4) was sound asleep and wouldn’t wake up, so he got to meet his newest sister the next morning.

It was wonderful to be in our nice warm house as a new family of six. My middle daughter brought me cup after cup of milk and a snack, because she thought I must be thirsty and hungry after all that. My mom had been in the room when the baby was born. My Dad came right up to meet her with our oldest, who was feeling better once we were out of the tub. We all watched as they weighed her and checked her over. We knew her first name was Eden and our oldest chose Love as her middle name. She was born at 9:30pm on December 4th during a raging blizzard. In hindsight, I know I was farther along in labour than we all thought. I was able to talk through my contractions right until the end. I thought I would labour all night, but being so comfortable and relaxed at home made it seem easier than it should have been at that point. I am very glad we planned a home birth and not a hospital birth because we would have ended up delivering her on the side of the road in a blizzard. Instead I got to cuddle up and go to sleep in our nice warm bed! It was wonderful.