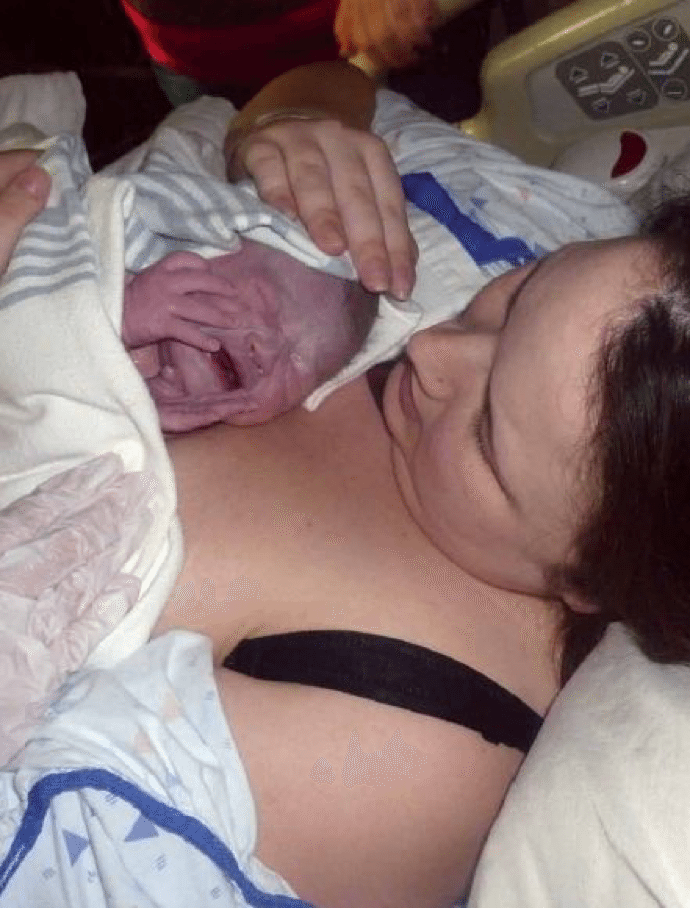 This birth story starts before we even knew we were pregnant. In July 2009, Dalen and I decided that we would start trying for another little one. We knew, based on our history, it hardly meant that we would see a positive pregnancy quickly.

At the end of August medical tests confirmed I was pregnant. The numbers weren’t rising as steadily as my doctor would have liked. I began to have that all too familiar sinking feeling. I was certain that I was about to miscarry…again. Unfortunately, I was right.

I’ve had losses. Seven of them to be exact but for some reason this loss seemed to hurt deeper than the rest. I was completely devastated. This miscarriage took the longest to happen. Dalen told me he wasn’t willing to let me suffer any more. We had to either find out what was going on or we needed to count ourselves lucky with the son we had.

A week later, I’d still not had a cycle. While it wasn’t unusual for me, my intuition was kicking at the back of my mind. The more I ignored the feeling, the stronger the feeling got.  I told Dalen that I wanted to test. He laughed at me– all of my pregnancies have had to be confirmed by blood work, as even late in pregnancy, HPT’s show negative. I told him that I was serious, so he dutifully went out.

I waited in the bathroom after I tested. When I looked at the test I found myself staring at two lines.  I’d never seen that happen in real life. I was shocked. When I realized what I was looking at, I jumped up and down, did a silent scream and took the test out to Dalen. His reaction was priceless, “Hmm, that says your pregnant…wait. It SAYS you’re pregnant!?” We embraced, and cried some happy tears, both still knowing that we had a long road ahead of us.

On June 18th, 2010 I started to feel really sick. I was getting hard contractions, but the kind that never seemed to amount to anything. I had been vomiting for two days and could barely keep anything down. Being pre-term, I was anxious and totally not ready to be in labour.

On June 19th, the contractions moved into my back. The contractions got worse and I called Dalen home from work.  When my mother-in-law arrived, we rushed out the door to the hospital. I remember closing my eyes and telling the baby, “No, it’s not time. I’m not ready, you aren’t ready. You have no idea what this will mean if you come now. Please stay in for a bit longer”.

The hospital confirmed I was having contractions and baby was healthy. I was told to go home, take some Gravol and keep my feet up. I happily accepted this diagnosis and almost raced out.  I was going to keep that baby inside me for at least another week.

At my appointment with Dr M, he decided to do an internal to see where the baby’s head was.  I told him point blank that the baby was most definitely head down. I was told he was just checking head position, but he definitely did a stretch and sweep. I was not 37 weeks yet. I was in tears driving home; livid that he had done something to me without my permission. The contractions continued on that night, getting stronger, but eventually tapering off at about 1 am.

Sunday June 27th, was the day of my Mother Blessing. That afternoon, as I was surrounded by women whom I respect and love dearly, I felt another part of me let go of my fear of giving birth to this little one. On Monday June 28th, I was grumpy. I had gotten all of four hours of sleep.  Around 1 pm, as I got Matteo ready for his nap, I had a contraction that made me stop in my tracks. The contractions were soon coming about four minutes apart, and were lasting about 40 seconds.

At 4 pm, I realized that this was probably the real deal. When Dalen came in the door, we got ready to go to the hospital. It felt like mass chaos, trying to get Matteo ready to go to grandparents and still trying to manage through the contractions. Finally, Matteo was off and we made sure we had everything.

I called Krystal, our doula, to tell her we were on our way to the hospital. When we got there, I was hooked up to the monitor and they did an internal exam. I was three centimetres dilated. We were told to walk…so off we went.

Once back at labour and delivery, we were checked again for dilation and there was no change.  I was asked to put on the hospital gown and I refused. For whatever reason, not putting on the gown felt empowering.  I asked if we could go walking. It was at this point that I was told to stay on the floor as my labours progress fast when they are ready to go. I agreed, but the rebel in me knew I’d only stay on the floor for so long.

This was the point where I became very aware that I was in a hospital giving birth and that I was going to have to speak up for myself if I wanted my birth to go as planned. Once back, another check showed I was still three centimetres. The nurse told me that they wanted to start me on an oxytocin drip. There was a pause and then she indicated that they could break my water too. I told her that I was NOT okay with the drip, but would consent to my water being broken. I said I’d like to walk around for a bit longer before that happened and she agreed.

Realizing that I was starting to have a birth where the staff were clearly becoming impatient, I told Krystal and Dalen that we were going to leave the floor and start walking in the atrium.

When we got back to the triage room, I knew that I was going to have to make a decision. While in the bathroom, I decided that I was okay with them breaking my water, as long as I had the freedom to move around.

Dr M came in, broke my water and left. The water was clear. In a moment, my pregnant belly had turned into mush with just a little baby in it. I was hooked up to the monitor for what felt like forever, and the contractions began to pick up.

I put Dalen to work filling up the tub in the room.  As soon as the water looked high enough, I literally jumped in. I groaned with relief as the water took off the pressure on my back. It felt heavenly to be sitting there with little or no pressure. When Dalen got in, he put the water hose on my back making contractions more bearable.

I felt pressure down low, so I got out and was checked. I was four centimetres. I was feeling slightly frustrated because the pain was beginning to become more intense. At this point, not even more than an hour and a half after breaking my water, the nurse told me that there was an order to put me on an oxytocin drip to augment my labour. I was livid. I told her that I didn’t want it. She seemed reluctant and said that Dr M had ordered it. Dalen slipped into the conversation and said, “Okay, well can we discuss it and talk about it again in a half hour?” The nurse seemed to accept his negotiating, so we were left alone for the time being.

Within a matter of minutes, my contractions started to get into an insane pattern. I was lying on the bed because I was exhausted.  All I wanted to do was sleep. In between the contractions, I would rest my eyes and tell myself I was one contraction closer to the baby.

In my head I was coping so well, but the words coming out of my mouth were entirely different. The contractions were doubling up occasionally. I started to feel like I was completely losing control of the situation. All I wanted was to sleep. I wanted rest. I began to beg for an epidural.

Krystal suggested every possible thing to stall me from getting an epidural. Dalen would echo her and tell me how good I was doing. After one big massive contraction, I quickly hopped out of bed and into the tub. I lasted about another 10 minutes in there.

As I got out of the tub, I experienced a huge wave of nausea and threw up a bit. I got to the bed and the nurse checked me again. This time, I was six centimetres. Dalen and Krystal congratulated me, telling me that I only had four centimetres left to go and that I could do it. I argued in between contractions. The next set of contractions came fast and hard, doubling, sometimes tripling up. I was on my hands and knees and yelled into the pillow, willing myself to pull the contraction out of my body with my voice. I kept begging for the epidural . Dalen softly told me that if this was anything like my labour with Matteo, I was going to have a baby in 15 minutes. The nurse showed me the progress chart and told me I was close.

Another wave of contractions came and suddenly I felt a ton of pressure. The nurse quickly checked me, and looked surprised as she announced I was now seven to eight centimetres dilated, and that an epidural was no longer an option. I groaned in protest. Despite my verbal disappointment, I was happy.

The next contraction came, and I yelled, “I NEED TO PUSH!” The nurse looked sceptical. The look on her face was the last thing I remember seeing.  I could hear the surprise in her voice when she told me I was fully dilated, that she had moved the rest of the lip of cervix, and that I could push. My body was yelling at me to push. When the next contraction came, I knew I wouldn’t be able to stop.

All I could think was, “Pushing will make the pain go away”.  I pushed spontaneously, allowing my body to do the work. Another contraction came and I could feel the baby crowning. I took another breath and pushed. I felt my body lose all the tension and felt her slip out. Seconds later, I heard her cry, as everyone announced it was a little girl. She was immediately placed on my tummy and chest, as Dalen kissed me and told me how amazing I was.

Cedar Susannah Lynn Cervo was born at 1:58am weighing in at six pounds and nine ounces and was 18 inches long. She came out crying, and continued to let the world know she was there. She initiated breastfeeding on her own within 15 minutes of birth, latching on like a champion.

I was quite afraid of how my birth would go while in the hospital, as my hope had been to do it at home with a midwife. While not all aspects of it are the perfection I had dreamed of, given what I had imagined it would be like, my birth with Cedar was incredible.